Rumney was named after Robert Marsham, 2nd Baron Romney (pronounced Rumney).  The town was originally granted in 1761 by Governor Benning Wentworth to settlers from Colchester and East Haddam, Connecticut. It was first settled in 1765; however, some grantees failed to comply with the charter, so Rumney was re-granted to another group of settlers in 1767.

Rumney Rocks, located between Rumney village and West Rumney, is a rock climbing destination renowned for its sport climbing routes. The majority of the climbing is found on the numerous small cliff faces on the south face of Rattlesnake Mountain, much of which lies within the White Mountain National Forest.  There is a climbers association called The Rumney Climbers Association which is a small non-profit organization that began at time when Rumney needed to secure access to the cliffs in the early 90’s. It was spearheaded by local activists that worked hard to purchase land that was privately owned. A very popular local attraction for kids of all ages is the Polar Caves.  Did you know The Polar Caves were formed about 50,000 years ago?You can do a self-guided tour through Polar Caves which will take you to the rock garden, on the nature trails and through the nine caves in the park. Want to know more...

When you're in the area stop in at the Rumney Rocks Bistro where you can taste Chef Owned Homemade Recipes, enjoy Casual Dining and Friendly Atmosphere. The eatery is kid friendly, great for group entertaining and walk-in's are always welcomed. 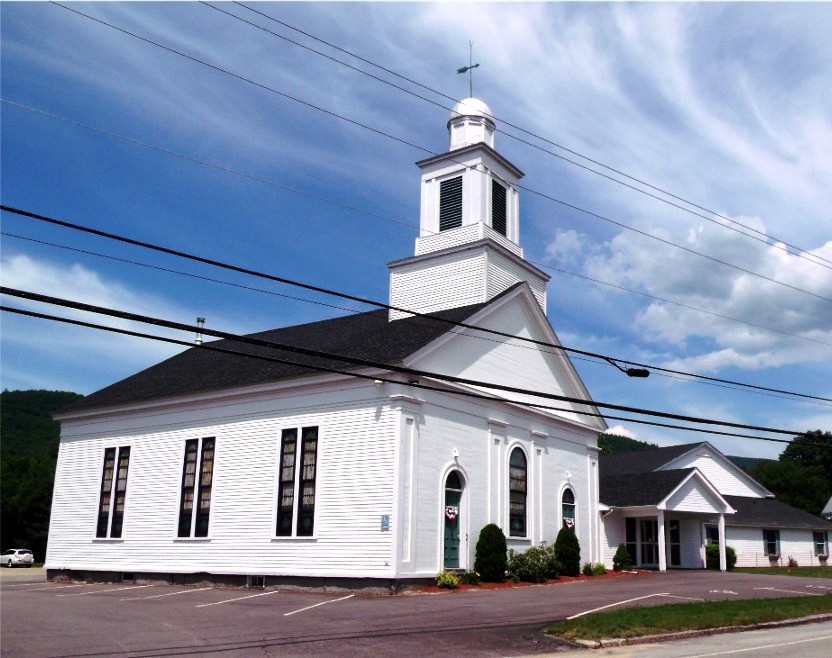 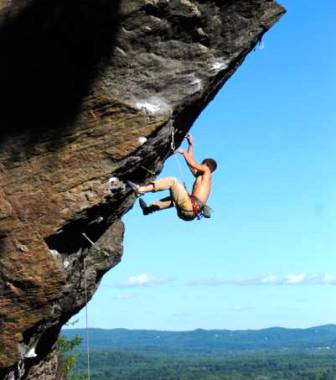 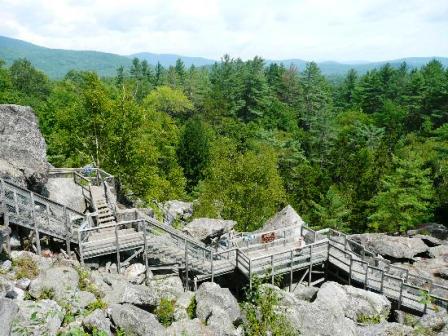 This property is home to The Common Café and Tavern. A local favorite that has closed as ownership moves on to another chapter. The commercial kitchen, café and tavern are turnkey and ready for someone to flip on the lights and open for business! The property also includes two residential apartments and one commercial space currently being leased by a massage therapist and acupuncturist. This is a unique chance to have in place income while you grow your restaurant business or find that operator for your investment. Capitalize on the influx of growth in this four season community. Whether you are a restaurant operator or investor this opportunity is not one to miss. 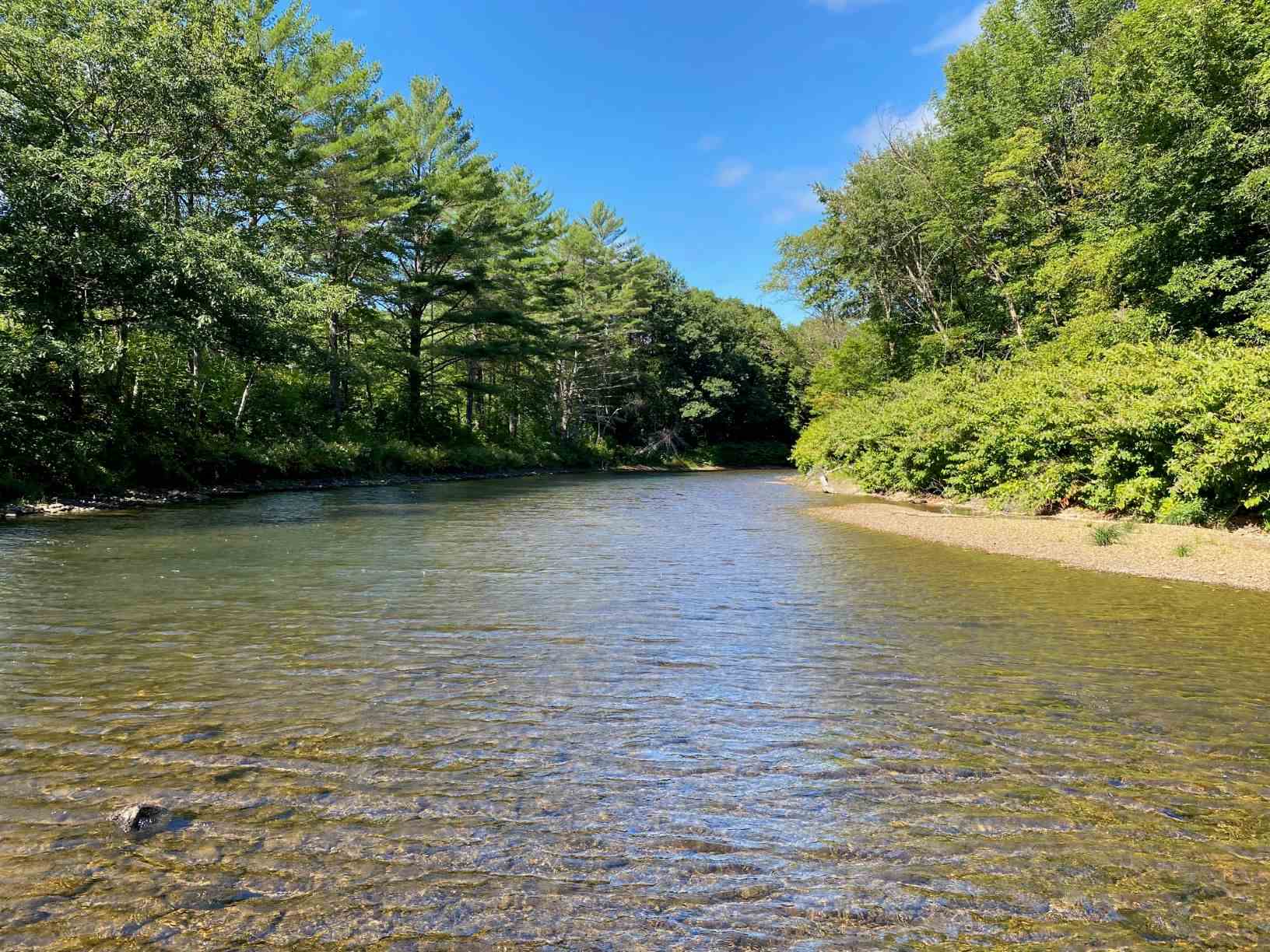 Opportunity is knocking! This is a remarkable piece with HUGE road frontage as well as HUGE river frontage. Very suited for a gentle mans farm, private home, subdivision, or gravel pit! AMAZING possibilities with this one! Owner financing available. 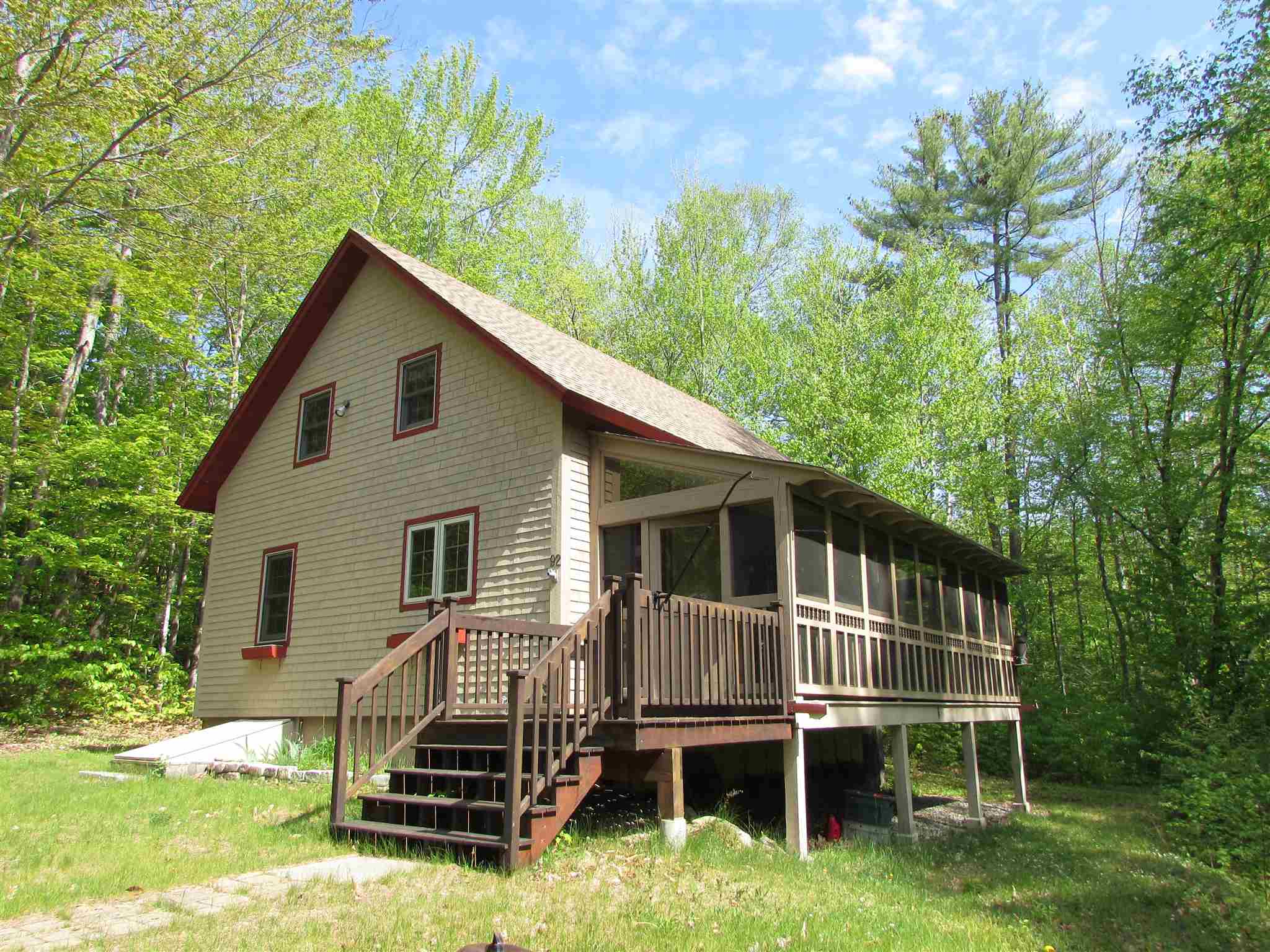 From Rumney Center it's 5 miles up the Mountain to this Stinson Lake three season cape styled home features post and beam construction throughout! Circa 1990 featuring open kitchen with appliances, living room, large dining area and first floor bedroom and 3/4 bath all with hard wood floors and wood walls. Full screened in porch 26' across the entire length of home. Access to the second floor is by impressive oak staircase leading to a large open loft with room for four beds and 3rd enclosed bedroom, designed to sleep 8. Full basement, Rinnai gas heat will keep you warm from Easter to Thanksgiving. Pounded well and 1,250-gallon septic all on acre plus lot. Spectrum TV & Internet. Immediately across Stinson Lake Road and lake via a short walk to deeded water frontage. Private road maintained by small lot home owner's association without annual fees sharing 318' waterfront with seasonal docks for water craft for summer recreation. Stinson Lake is crystal clear and is 342 acres and 70' deep. Great fishing with Rainbow, Lake and brown trout. Pristine water offers swimming, boating & fishing. The area has many snow mobile trials and climb up Stinson Mountain and Rumney Rocks which is famous for rock climbing. Run around the lake which is 5 miles or climb Three Ponds hiking trails and cool off in the lake! Showings to start on April 8, 2021.

Listed by Diana Wiita of BH&G - The Masiello Group 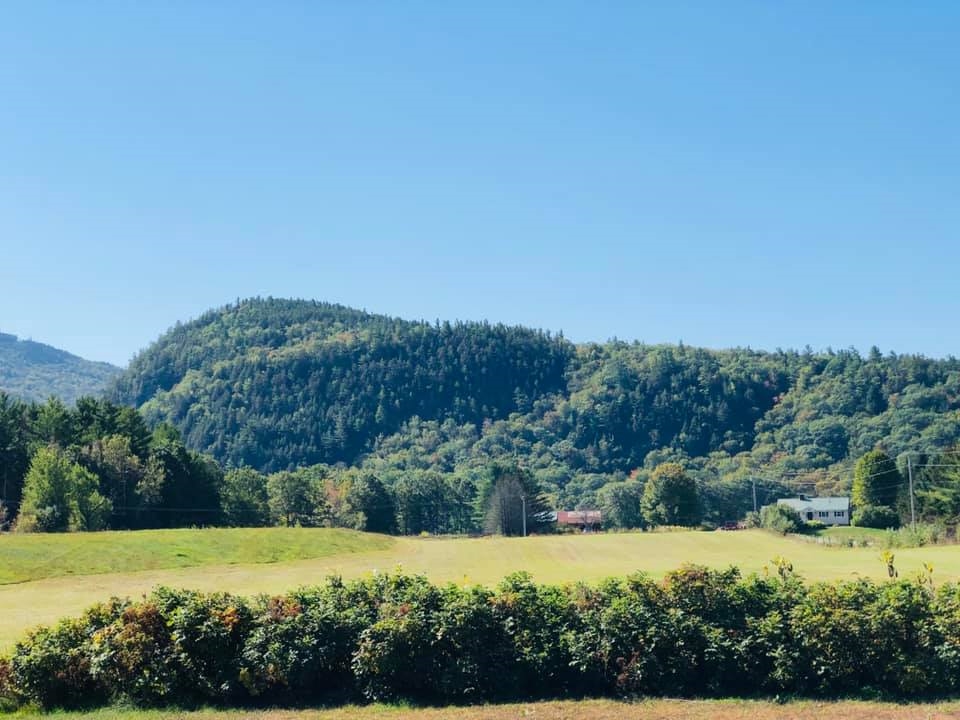 STEP INTO NEW ENGLAND LIVING AT ITS FINEST....this 1865 farmhouse has been lovingly restored. The back farmers porch overlooks beautiful pastures and rolling mountains. Tired of the city life, want a little more space? Imagine starting your day with watching the sunrise over the fields on the farmers porch and admiring the beautiful perennial gardens in your peaceful backyard. This beautiful 1865 3 bedroom 2 bathroom home has many beautiful features such as stained glass windows, curved doorways, and hand hewn beams throughout the house! As you step into this oversized kitchen featuring tons of counter space, a kitchen island, a cozy sitting area right next to the wood stove. This kitchen even features a pantry/mudroom right off the back porch and is connected to the barn!!! the 1st floor features a tons of windows with bright living spaces and hardwood floors. This 3 bedroom 2 bath home will leave you charmed in every direction and then takes your breath away as you step into your private backyard. Come check out NH living at its finest!!! This home is close to I-93, skiing, snowmobile trails, climbing and PSU, COME WORK FROM HOME FROM YOUR VERY OWN NEW ENGLAND FARMHOUSE!!!

Listed by Adar Fejes of KW Lakes and Mountains Realty/Meredith 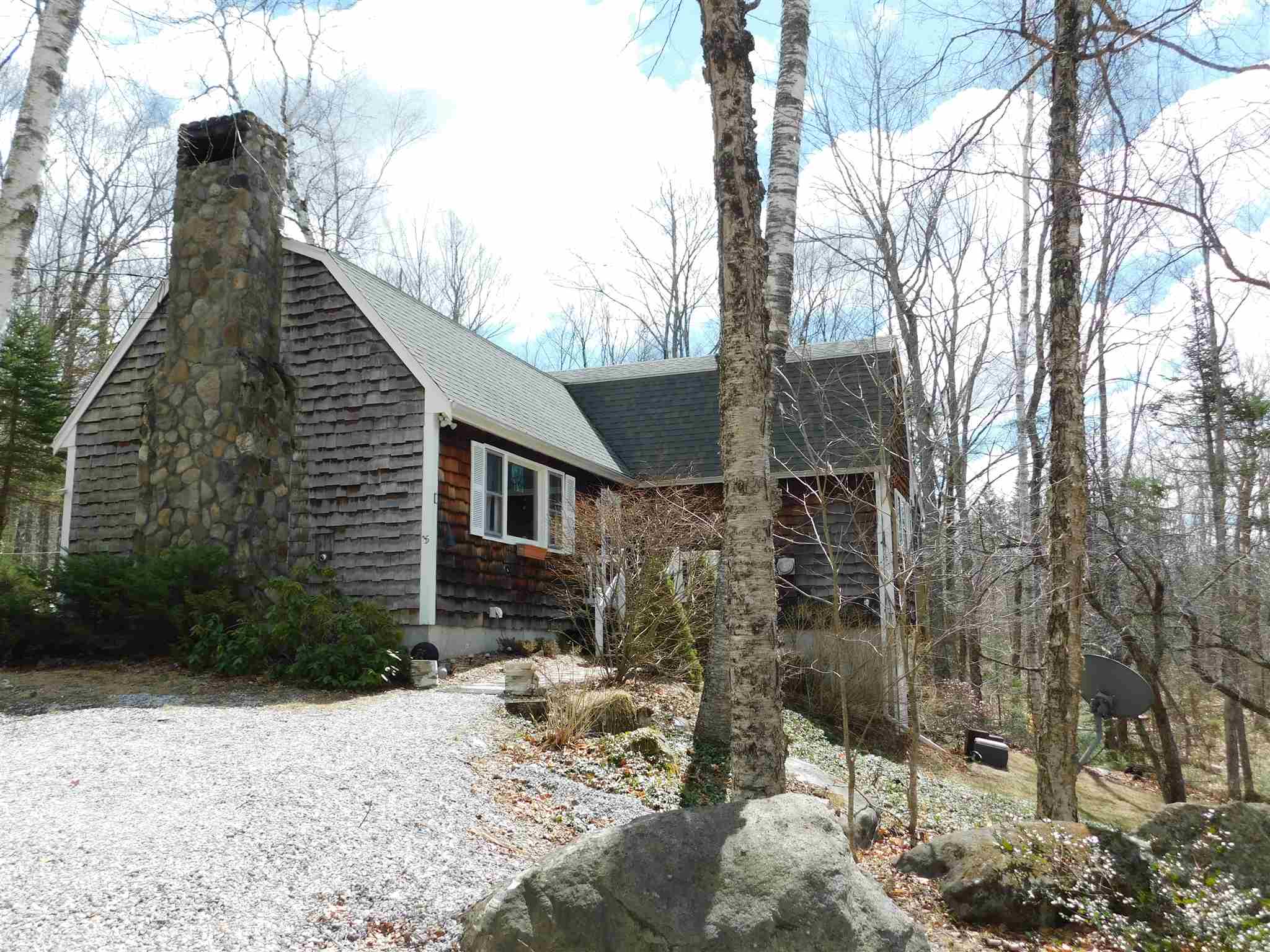 Looking for a quiet location where you can get away from it all? Looking for a place with easy access to snowmobile trails and hiking trails? Looking for a place with lots of hunting and fishing close by? This home is just minutes from Stinson Lake, the largest lake in the WMNF at 342 acres. Also minutes to the Stinson Mt trailhead, a Mt that offers beautiful views at 2900'. This home has one level living with the kitchen, living/dining areas with lovely stone fireplace, 2 bedrooms, full bath, and a beautiful screened-in porch on the entry level. It's a bonus having the downstairs (with outside access) that currently has a family room with efficient woodstove, full bath, laundry, and extra sleeping spaces. This home may need a little love but has endless potential. Showings start April 10. Call to schedule a showing. 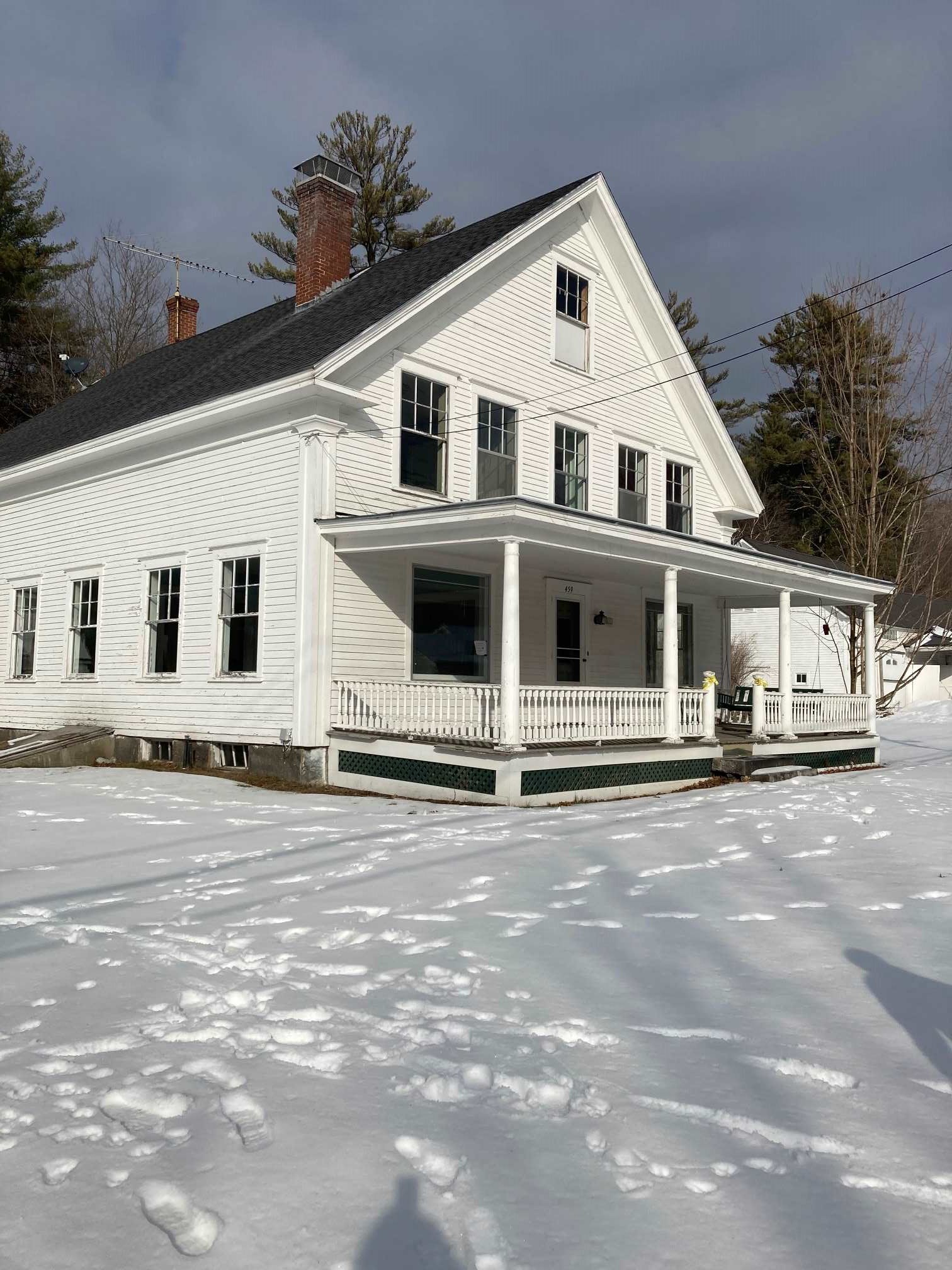 Another Rumney Village antique...what a beauty! This home is located smack dab in the middle of lovely Rumney, next door to the Village Store, 3 minutes to Rumney Rocks, 5 minutes to Stinson Lake, 10 minutes to Tenney Mountain, climbing, hiking, biking, fishing, skiing/snowboarding, snowmobiling...you name it we got it! This beauty may need a little love, but it will be worth it. Solid bones, beautiful character (pocket doors; high ceilings; hardwood floors, etc...) and ideal location make this property perfect for that transition to NH living. Welcome to the White Mountains! ***Septic may be in failure; Property to be sold "as is"*** 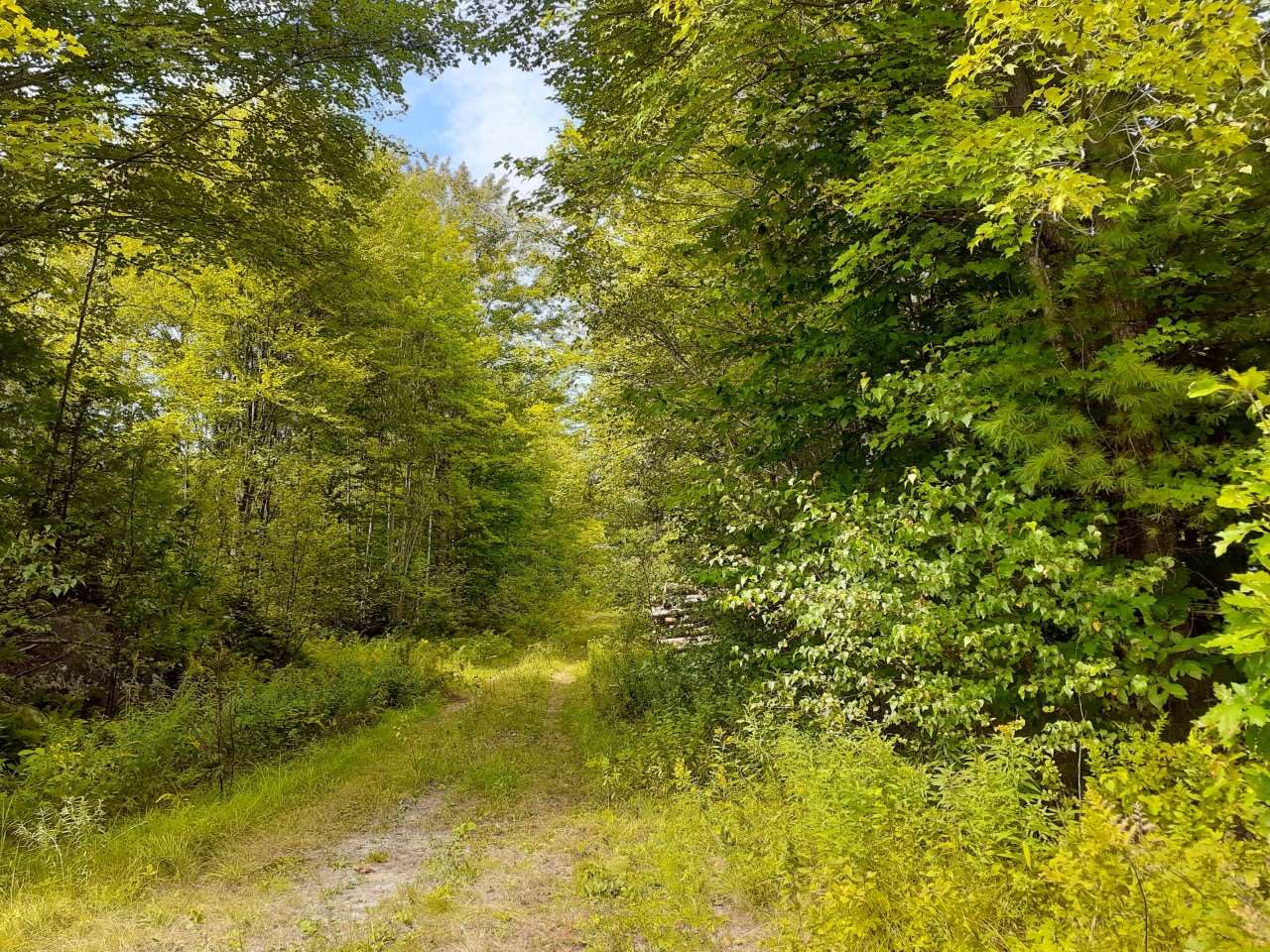 Private, wooded 32.3 acre lot with roughed in driveway. This lot has easy access from a town maintained road. Nice mountain views with cutting and season changes. Lot has a roughed in driveway up to an open area and then continues up further. Short ride to all the area amenities, shopping, restaurants, etc. If you are looking for a place to get away from the city or build your new home, this may be the lot for you. Property is in current use. 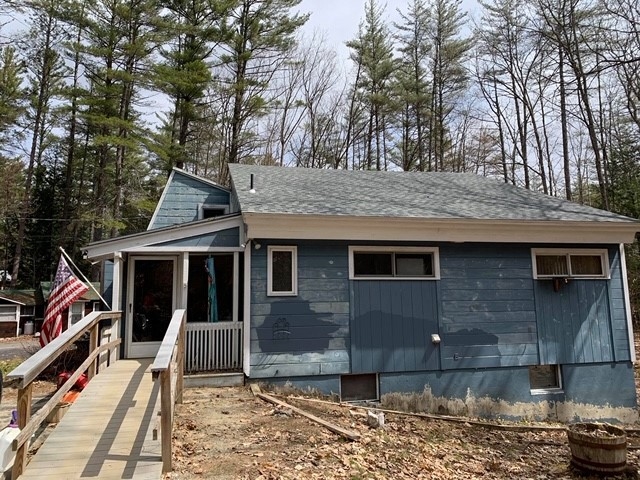 Come make this fixer upper your own! With almost 2000 square feet of living space the possibilities are endless. The 3/4 bathroom is brand new with easy access walk in shower. Subject to third party approval. Property sold as is. Buyer must be a member of New England Fellowship of Evangelicals. Document under paperclip. 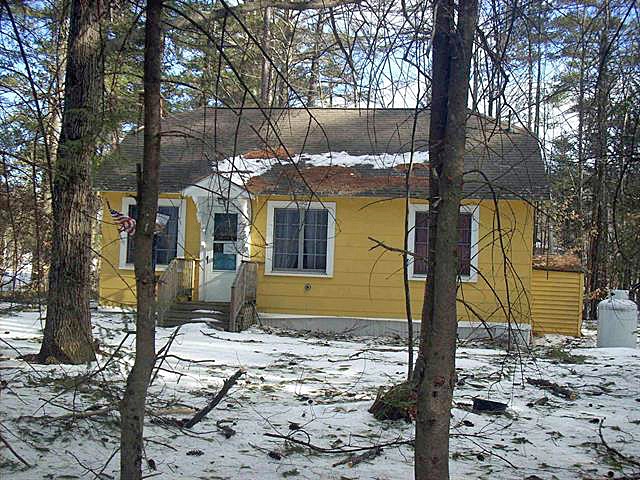 Need a get away in a the Lakes reagion. Peace and tranquility, close to the Polar Caves, Newfound Lake, Waterville Valley 20 minutes aways, Franconia Notch, along with all amenities needed just 5-6 miles down the road in Plymouth. Wellington State Park only 15 minutes away on Newfound Lake for a small fee to swim, or launch your boat. 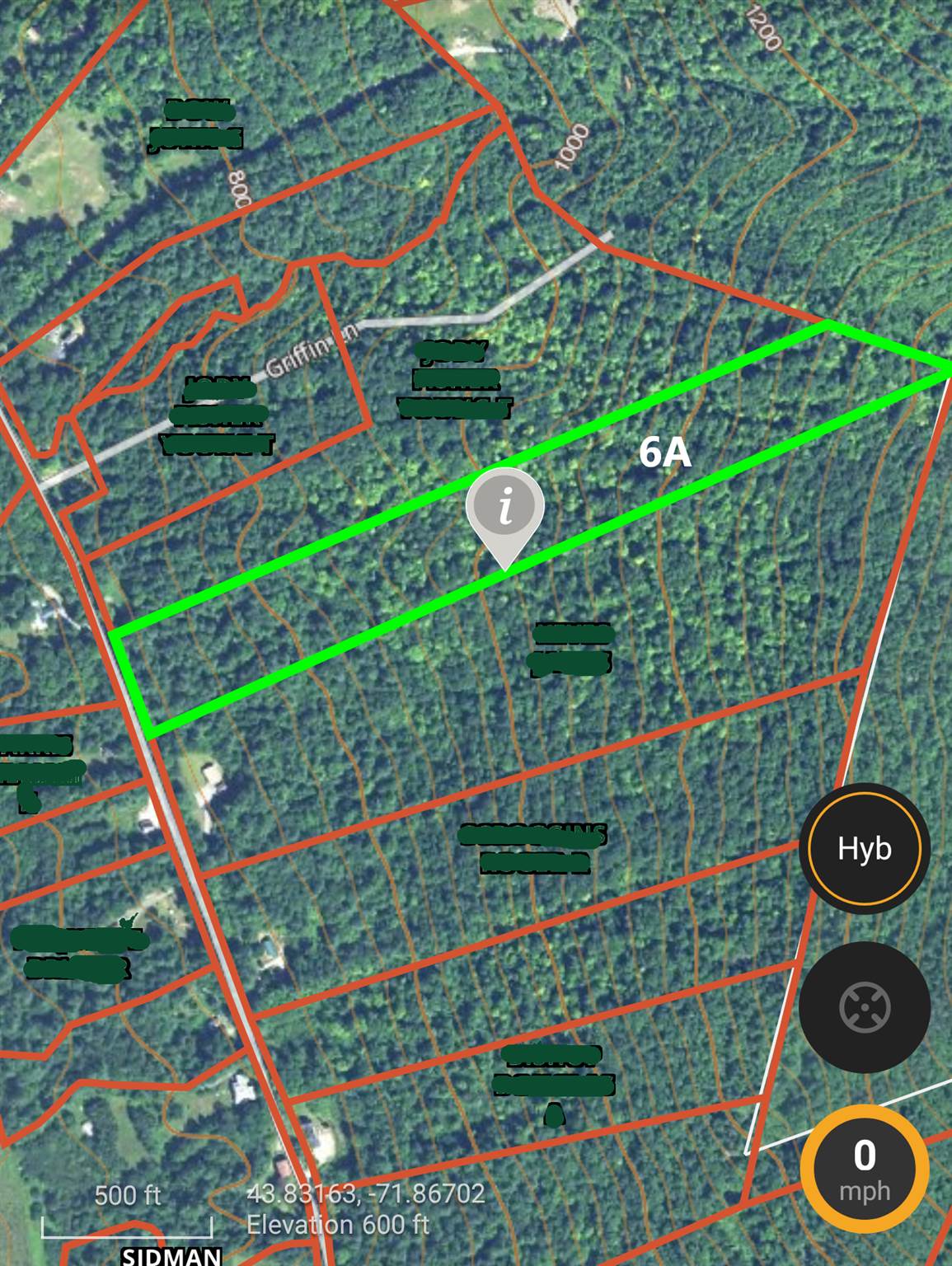 CALLING ALL CLIMBERS! In the heart of the Baker River Valley, this amazing 15+ acre lot is just 3.5 miles to main parking area of rock climbing mecca, the cliffs Rumney Rocks!! Only 2 miles to the Rattlesnake Mountain trail head and 4.5 miles to Main Street Rumney. A quick 15 minute ride brings you to shopping, dining, Speare Memorial Hospital and Plymouth State University in downtown Plymouth, or to the public launch at Stinson Lake. 10 minutes farther and you're at the north end of Newfound Lake or east side of Little Squam Lake. The lot line goes nearly a half mile back from the the street, so build your own mini hiking trail to the back property boundary. Several well-established wildlife paths will help you get started. Great place for a trail camera? Street address is only an estimation of 911 location, subject to change upon completion of construction. (10 of these acres are in Current Use)

Great business opportunity with many options, Great location on Route 25, 4654 Sq.Ft turn key store with large walk in cooler, kitchen area easy in and out access with plenty of parking, store has room for possible seating area, this is a major route to northern towns and Vermont Large 32 x 50 garage behind store included in sale, adjoining lot available for additional 250 Ft. of road frontage. Snowmobile trail runs adjacent to property

Copyright 2021 New England Real Estate Network, Inc. All rights reserved. This information is deemed reliable, but not guaranteed. The data relating to real estate for sale on this web site comes in part from the IDX Program of NEREN. The information being provided is for consumers' personal, non-commercial use and may not be used for any purpose other than to identify prospective properties consumers may be interested in purchasing. Data last updated April 14, 2021.